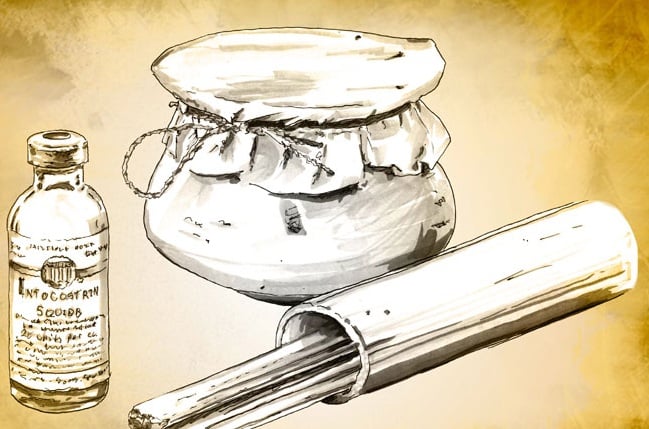 The bark of curare (Strychnos toxifera) is grated and slowly cooked till a dark deadly tar forms, used for daubing the arrow tips. This poison paralyzes quickly the heart. The curare poison is used for making the surgery anaesthetic called tubocurarine. In some regions of the Amazon, the curare poison is made of Curarea tecunarum.

The objects pictured, from left to right, are a vial of Intoconstrin (the first standardized commercial preparation of curare for medical use), a pot for distilled curare and a quiver of curare blow-gun darts, both of the kind made and used by indigenous peoples of the Ecuadorian and Peruvian Amazon. Curare is a chemical found in certain South American vines. South American indigenous peoples discovered its ability to paralyze muscles, and prepared it to use for hunting. Curare was stored in pots, and hunters dipped their arrows or darts into the carefully made extract so that when they pierced an animal it became paralyzed.

Western physicians long recognized the potential benefits of curare as a muscle relaxant, but a variety of factors delayed its development as a medication doctors could easily obtain and use. A determined American adventurer, Richard C. Gill (1901-1958), organized and led a ‘curare’ expedition to South America that was pivotal to the development of the class of drugs commonly called ‘muscle relaxants’. First used in anesthesia in 1942, muscle relaxants opened the door for profound advancements in anesthesia and surgery. They keep the body still during surgery and are especially necessary for delicate operations.

A special type of medication that temporarily and reversibly makes the muscles of the body very weak. Unfortunately, surgeons and anesthesiologist use the term "paralysis" to describe the temporary state of complete muscle relaxation that is rendered by these medications.

Tubocurare is no longer used today and has been supercede by synthetic muscle relaxants which have a shorter duration of action and are more predictably reversed when no longer required. 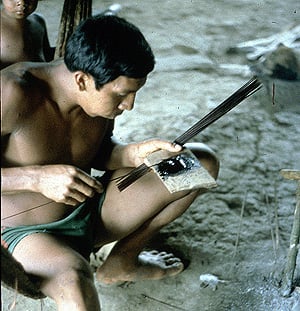