The Legend of The Sandman 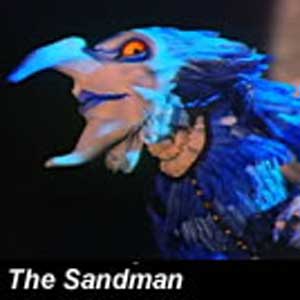 The Sandman is based on the old bedtime story that parents used to tell their children, hoping it would lull them to sleep. The actual origins of this tale are lost in the sands of time, and may predate written history, as one generation to the next passed along in variations the following fable:
E.T.A. Hoffmann wrote an inverse depiction of the lovable character in a story called Der Sandmann, which showed how sinister such a character could be made. According to the protagonist's nurse, he threw sand in the eyes of children who wouldn't sleep, with the result of those eyes falling out and being collected by the Sandman, who then takes the eyes to his iron nest on the moon, and uses them to feed his children.

In 1991, director Paul Berry animated this dark and unnerving stop-motion short film based upon an embellishment of Hoffman's story. This amazing piece of work was nominated for an Academy Award for Best Short Film, Animated. It generates an astonishing and terrifying atmosphere and Berry's depiction of the Sandman is a perfect realization of childhood nightmare, with monsters lurking underneath your bed or in the shadowy corners of your room. The animator and director, Paul Berry, died tragically in 2001 of a tumor. This video is viewable on the Music Video page.

Depictions in film and television

In the 1940s, there was a renaissance of comic book publishing and storytelling, which is still referred to as the Golden Age of Comic Books. The world was primed for it with the threat of Nazi doctrines and the horrors of World War Two causing many to desire escape into inexpensive forms of entertainment. Most well-known superheroes had their beginnings at this time, including Superman, Batman and Wonder Woman. However, a lesser-known fictional vigilante of the time was the Sandman. The character, created in 1939 by Gardner Fox and Bernard Christman, was a man named Wesley Dodd who, plagued by dreams of criminal activities, decides to use the power of his dreams for good. He invents a formula for several types of sedatives and hypnotic gases which he used on law-breakers by firing them from a unique 'gas-gun'. Dressing in a gas-mask to hide his identity, he captured criminals he had seen in his dreams by putting them to sleep, thus becoming the Sandman. Each time he defeated crooks he would also leave a short poem enclosed in some origami, the most common being:

There is no land beyond the law, where tyrants rule with unshakable power!
'Tis but a dream from which the evil wake, to face their fate, their terrifying hour!

During the 1970s, DC Comics reinvented the Sandman once again, giving him the alter-ego of Hector Hall. Written and drawn by the team of Jack (Spider-Man) Kirby and Joe Simon, he soon faded away as more intrepid heroes and television became increasingly popular and available. In 1987, an up and coming writer Neil Gaiman was asked by DC Comics to work on a comic book title. He was not interested in the idea of writing a predictable, caped-crusader type of tale. DC were keen that he resurrect one of their defunct characters and he bought back little known Black Orchid. With the success of this, DC contracted Gaiman again. Neil was interested in the Sandman character from the Golden Age, but had a different concept. Karen Bergen, editor of the range at the time, said to him, 'Create a new character with the same name.' So he did. The World of Dream When Neil Gamain first created his Sandman, he perhaps didn't realise how big the character would become, or indeed how larger than life the Sandman already was.The Sandman resides in the world of Dreaming. He is its guardian and benefactor. Also known as Dream, Morpheus, Lord Shaper, Nightmare King and the Prince of Stories he is one of the seven Endless, who are all brothers and sisters.

The Sandman is briefly mentioned in Terry Pratchett's novel Soul Music, where we're told that, on the Discworld, he sends people to sleep with sand, without taking it out of his sack (i.e. knocking them unconscious with a sandbag).

The character of 'Karla', the Russian master spy in John Le Carre's Smiley's People is nicknamed the Sandman. As George Smiley explains "You know why they call Karla the Sandman, don't you? He has a way of putting to sleep [killing] whomever gets too close to him."
Sandman appears in the Specter dark fantasy The Myth Hunters by Christopher Golden. He is a vicious character that kills children and steals their eyes. 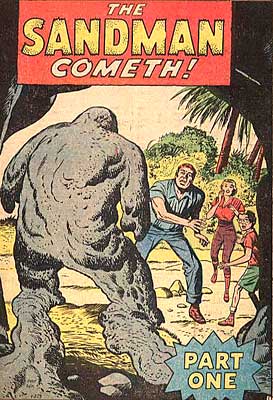 History: Ages ago, the humanoid-shaped sentient sandpile called “The Sandman” crashed its spaceship in Mexico. Thinking it was an evil spirit, the primative natives took the weakened Sandman and sealed it in a cave, where the Sandman lapsed into a state of suspended animation. Discovered and revived by a vacationing American family, the Sandman was released and battled military forces. The menace of the Sandman was ended by a boy who poured water on the Sandman, turning it into mud so it could not move. The Sandman was captured, taken to a military installation, and put under 24-hour guard.

Height: 7 ft.
Demonstrated Powers: The Sandman had complete control of the individual granules of sand that composed its body. The Sandman could alter its shape and was even able to take on human form. The creature could alter the cohesion of its sand particles so bullets would pass through its loose sand. It had no need to breathe, so it was invulnerable to gas attacks. An exploding bomb dispersed the sand particles of the creature's body, but it then reformed its body. The Sandman could combine its body with the sand of a beach to increase its size. The Sandman's only demonstrated vulnerability was that water could be mixed with its body, thus reducing it to a mud-like state where it could no longer move. The Sandman was presumably left in this state.

Various comic book characters have been named after the Sandman, with two from DC Comics, the various Sandman superheroes.

There is a creature that comes to you in that space of time just before you fall asleep. Some time after your eyes close for the last time that night, and some time before you fall into a state of unconsciousness, he materialises over you. Is he an angel or a devil? No one is sure because no one has ever got a good look at him. Some claim he has a head shaped like the crescent moon, and dark eyes with stars inside them. He carries with him a bag of magic sand, and he sprinkles a very small amount over your face. Some say it twinkles in the moonlight, like a thousand tiny stars just over your face as they fall. Some say the sand actually sounds like a music box, or the flitter of faerie wings. No one has ever really heard the sound however, for by the time the sand touches your face and alights about your eyelids, you're on your way to dreaming.

The grit or 'sleep' (rheum) in one's eyes upon waking is supposed to be the result of the Sandman's work the previous evening.

The connotation of a benign figure who induces quick and painless "Sleep" with pleasant dreams is in many ways analogous to modern Anaesthesia. It is not uncommon for patients undegoing surgery or surgeons to refer to their anaesthetist as the "Sandman". 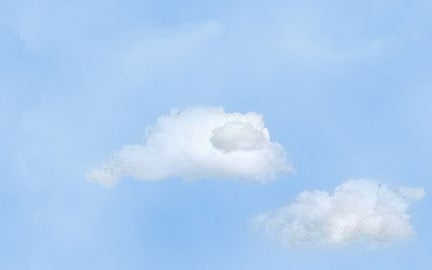 Ole-Lukøie, one of Hans Christian Andersen's more obscure folk tales, told of the different dreams the Sandman gave to a young boy in a week.